Cash Buster Towers is a collect-style instant-win game that involves destroying blocks to win corresponding prizes. You win by destroying all of the blocks in a prize tower. The biggest reward available is $15,000.

The design is simple but visually stimulating. At the beginning of each round, you start with five spins, and it’s possible to complete a full round in under 30 seconds. Normally, you win a prize in three out of ten betting rounds. You have a 1 in 3.22 chance of securing any reward.

Here are examples of the odds of scoring larger payouts:

The minimum bet is $0.50 and the maximum is $20. You can place seven different bet amounts:

How to play Cash Buster Towers 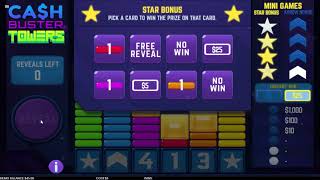 Cash Buster Towers’ layout is divided into three sections. The game board is in the center section and includes six prize towers. Each tower comes in a different color and has a prize block at the top. The right-hand section displays a meter for the Arrow Bonus mini-game, the Star Bonus mini-game, a Circle Meter, and instant wins. The left-hand section features the spin button and the number of spins remaining in a given round.

Start a new round by making a bet. The +/- buttons on the CHOOSE BET screen cycle through betting numbers. Click PLAY after selecting your bet size. Next, click the SPIN button in the bottom left corner.

The blocks in the reel at the bottom of the screen then shuffle. There is one block beneath each prize tower. Each block stops on either a number, a circle, a star, or an arrow.

Filling out a bonus meter activates the corresponding bonus round.

On removing all the blocks from a prize tower, you win the amount indicated by the prize block.

How to play the Star Bonus Mini-Game

When the Star Bonus mini-game is activated, eight cards will replace the game board. Select a card to reveal your prize. Available options include No Win, Free Spin, Instant Cash, and Block Removal. Block Removal prizes have a number and color; the number indicates how many blocks are removed from the prize tower of the corresponding color.

How to play the Arrow Bonus Mini-Game

When the Arrow Bonus mini-game is activated, a prize wheel replaces the game board. Spin the wheel to win the prize shown. The prizes are No Win, Free Spin, Instant Cash, and Block Removal. Block Removal prizes have a number and color. All of these features function exactly as they do in the Star Bonus round.